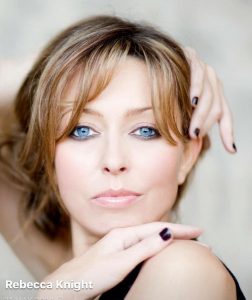 Each year has been sold out so don’t wait.

“I’m so excited to announce that my beautiful friend Rebecca Knight will be joining me on July 23rd at the Pheasantry. Her wonderful warm voice and personality have gained her an international career as part of the duo Opera Babes. I had the joy of sharing the stage with Rebecca in the USA a few ago. She is a real stage animal and has such incredible talent. I know that rekindling our friendship and singing together will be amazing. It will prove to be a great night on July 23rd. Can’t wait.  ~ Mark “

Rebecca trained and worked as a professional dancer and went on to work for many prominent choreographers including Gillian Lynne (Cats). She then turned to singing and has performed as a soloist in operas such as The Magic Flute, The Barber of Seville, The Marriage of Figaro, Carmen and many more.

In 2002, she and a colleague signed a major record deal with Sony and rose to fame as the OperaBabes (a name chosen by Sony!). Their first album sold in excess of 1.5 million copies and was No.1 in the charts across the world, also being nominated for a Classical Brit award.

She has performed for the Queen on many occasions, twice at Buckingham Palace, at the Jubilee Prom at the Palace and also for the launch of the Commonwealth games. One Fine Day, the single taken from that album was used as the ITV theme tune for the World Cup.

The Opera babes were the first classical act to perform in Las Vegas and have sung alongside Placido Domingo at Los Angeles Opera and Andrea Bocelli at the Royal Albert Hall.

Rebecca regularly sings with all the UK leading orchestras in concert, on radio and television and has been the subject of 3 documentaries. The OperaBabes recently signed to Warner Classics and released their 3rd album, a collection of British songs accompanied simply by piano, to great critical acclaim.
Full details about the Opera Babes can be found on their website.

The baritone is back! At The Pheasantry Saturday 23rd July 2016 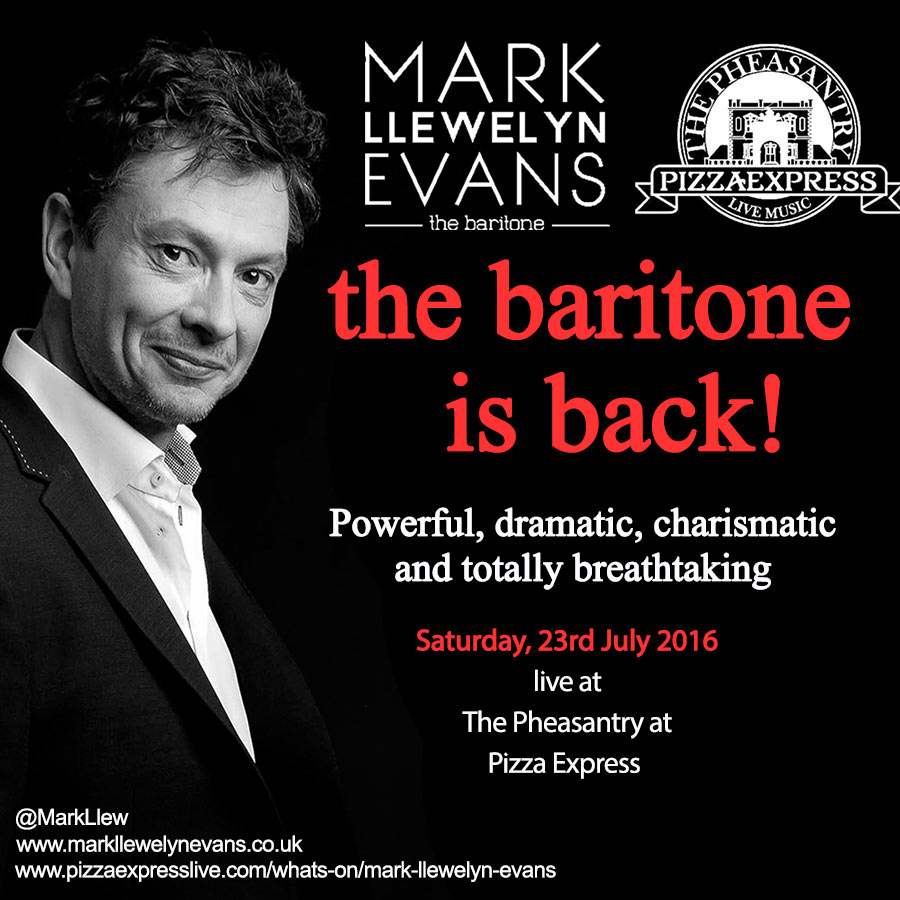 Described by the New York Times as “a natural entertainer bursting with presence” Llewelyn Evans makes a welcome return to the prestigious Pheasantry for a third year on Saturday 23rd July 2016. His sell out performances both in the UK and across the pond prove his one-man show offers a mesmerising evening celebrating the most moving, evocative and compelling music of our time.

The Pheasantry has been ‘home’ to the likes of Eric Clapton and watered the poetic talents of Dylan Thomas. Intimate, classy yet relaxed, the venue offers the perfect setting for a panoply of Evans’s unique renditions of the classics, love songs and musically spellbinding tales. His magical voice transports his audiences to other worlds with timeless classics of Rodgers & Hammerstein, glorious Gershwin, Morricone, Barry and many more.
“I could listen to his voice all day.” ~ FOX Television

“A warm baritone voice, with humour to match. An international career opens before him.”

What his fans say

“Veritable genius with a love song…any song; the voice takes you to places only found in the deepest of dreams and desires. Wouldn’t fly thousands of miles to hear anyone else!!”

“….wraps me in a warm hug every time I listen….which is often all day non-stop xx”

“…..wonderful voice, great performer, always gives 110% AND he gives precious time to his fans – he’s not bad looking either ! x”

“The first time I heard his voice was on twitter -“Tell My Father” with the Welsh Guard. I experienced a visceral response to the rich tones of his voice that persist to this day. However, as wonderful as his recordings are, it does not prepare one for that glorious baritone one hears in person.”

“We laughed, we cried, we laughed until we cried. Mark’s show at The Pheasantry last night was just awesome!”

The Pheasantry at Pizza Express on Saturday 23rd July 2016.

“He is a true entertainer who captivates all his audiences; from intimate performances to concert halls. They love his stage presence, funny stories, expansive repertoire and stunningly powerful voice.”