From Cowbridge to Casablanca – the long way around

Who said that show biz was glamourous?

After the hugely successful concert with the Rock Choir and Ellen Williams on Sunday night, it’s 3.30am on Monday and I’m leaving home for Cardiff airport. Luckily in good time as my suitcase was two pairs of pants over its allowance. 5am I am repacking and adding extra underwear to my already overdressed attire to save paying the baggage excess, Looking like a SuperTed now certainly not Superman.

Cardiff airport security has become more like Miami. After removing my coat, belt, shoes & glasses I still set off the alarms. My sense of humour was fast disappearing as I was taken off for further stripping.

FIRST flight to Amsterdam, packed to the rafters, more security and passport screening, before rapidly crossing Schiphol for flight number two to Charles De Gaulle. A third security frisk and I’m on my final flight. 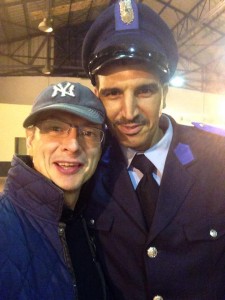 Fourteen hours after leaving Wales I’m in the busy Moroccan airport of Casablanca (not as romantic as the movie makes out). Like birds of prey hundreds of taxi drivers bombed me as I tried to explain that I’m being collected. A tense and stressful two hours my driver arrives speaking no English and not knowing where to take me. In school french it’s “Allez Le Port“.

The worst forty-five minutes ever. I thought this taxi ride might end my life. We scraped cars, shot through red lights, mounted pavements, etc.. Luckily I was still wearing my many layers of pants.

Eventually we got to the port. I could now see the ship BUT couldn’t get passed police officers with large guns barricading the way. Now late for boarding, the ship’s calling my mobile asking where I was but I couldn’t leave the makeshift immigration shed until prayers had ended.

An hour later (no rush as far as they were concerned) prayers ended and drinking mint tea started. After proving I could sing I was allowed to rush to the ship and we were sailing to Tangier.

Tangier has the most amazing atmosphere and from the moment I hit the Medina I was spellbound. So much local produce from meats (every bit of each animal was displayed) fresh herbs, vegetables, fruits, the largest fish market I`ve ever seen, tuna the size of a shark, breads of every shape and size, flowers of every colour, bags of live snails, camels walking around, spices that sparkled – it really was an overload on all my senses. Oh yes there were also large lumps of brown stuff “hash” and it seemed that most of the town were smoking it – another shock for the Carmarthen boy.

Today has certainly made up for yesterday and tomorrow is the reason I’m here it’s ShowTime, A sea day, then Canary Islands and next week a recipe from the Wine Guys who are preparing the award winning menus onboard.