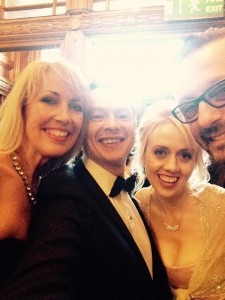 So last week ending with a red carpet at the National Film awards with various celebrities. I can never remember names or faces but with a little googling I realised I was sitting at a table of Stars. Idris Elba –  word on the street is he’s the next Bond. He received an award for Outstanding Contribution for Motion Pictures. Linda Robson – “Birds of a Feather”, Anthony McCarten – Producer & Author of “The Theory of Everything”. Chloe Jasmin – the posh girl on X Factor, and many more. When I Googled Chloe, the first image I saw was a nude so when we spoke I was glowing. What a sweetheart though. The awards will be shown on Sky on April 12th.

Back home for a few days then up to the smoke again with my daughter. We try to have a couple of weekends in London when we can catch a show, visit galleries etc. Good Friday we drove off singing the whole journey. We dropped off the car but instead of the normal underground mode of transport we took the Thames Clipper.

From London bridge we walked along the river passing HMS Belfast, then river boat to the O2 passing Canary wharf and many other iconic landmarks. At the O2 we joined our flight on the Emirates Cable Car. No queues just a little light rain and we were off. Twenty minutes flying high above the Thames watching the busy city below. I really hate fairground rides, but this was fun and very calming. You had to just stop. Really wonderful and Myfi was full of smiles too. From there it was back onto the Thames where the night lights were illuminating the river and as we passed under Tower Bridge it was really very beautiful. Supper in Covent Garden then bed to collapse.

Saturday morning I was asked out of the blue if we could go to Harrods. Myfi wanted to discover more of the amazing store after her Mamgu had taken her there. A few hours at Harrods with open mouths taking in all the sites. Lunch at the Pheasantry in Chelsea then a long walk back to the West End for our Easter Egg treat “Miss Saigon”. Like all west end shows the atmosphere was electric. We had a ball although tissues were needed at times. From the theatre it was a late supper at the retro restaurant ED`s in Soho where the buzz of London was certainly at its best. Everyone we met was so lovely to Myfi sharing stories and experiences with her although at heart I have a country girl I think.

Sunday morning -the Oval Tavern in East Croydon famous for its live music and home cooked dinners. We certainly weren’t disappointed with our Easter treat and with full bellies, wonderful music ringing in our ears and a heart full of happy memories we left London and headed west.

Oh yes I`ve  also got some exciting news re sharing the stage with another Carmarthen talent but more of that next week.