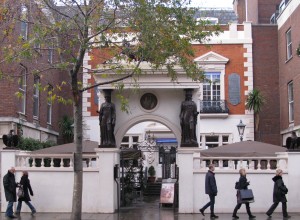 Constructed in 1766, 152 Kings Road Chelsea, a grade II listed building, the iconic Pheasantry club on the King’s Road, London gets its name from the business of Samuel Baker who developed new breeds of oriental pheasants. In the 60`s it became the home for launching careers in the music industry. It`s basement became a Bohemian restaurant patronised by the likes of Dylan Thomas, Humphrey Bogart, Anthony Hopkins and Richard Burton. Now well known as a prestigious venue for showcasing high end talent of our time.

It was to that basement that I returned with my band of minstrels to perform for a packed London audience. The show includes genius film scores of Morricone, sexy songs from  Bacharach and the classics of Rodgers and Hammerstein all rearranged by young vibrant talent.

The evening was wonderful for so many reasons, friends that I hadn’t seen in 20 years rocked up, fans that attend every concert, lads that I met at the Wales v England rugby match, Linda Robson and Lesley Joseph etc.  It really was a party from start to finish.

I was asked to showcase a young singer songwriter Louis Dunford. His music is honest and at times very beautiful but certainly edgy and truthful. My audience certainly wasn’t Louis’s and mine wasn’t his. But it was very special how both our very different music genres joined and shared the stage for the evening.

Invited by Louis Dunford to see three young songwriters to showcase their material in front of a live audience. As I sat listening to the pouring rain outside the remarkable young talent starting pouring their emotions out inside. Experiences that have affected them from killings on the streets of London, politics, being a single mum or the usual song about falling in and out of love. Hannah White, Louis Dunford & Bea Monroe are all talents that we should support and follow. They are young but already the industry is knocking on their doors. Bea, already signed is flying off to LA for a showcase next month. I was so honoured to have had the chance of hearing them at the beginning of their career. I was so moved how deep and rich they could all write and with such honesty too.

From the Hospital Club to the infamous Ronnie Scott’s. World famous American jazz violinist Christian Howes who even with his jet lag managed two master classes and a performance that I will never forget. I know nothing about the violin other than I had a few lessons with Syd Jones. But the way that Howes uses his instrument was remarkable it really was fantastic – thank you Kerenza Peacock for the invite (more young talent). Today, rehearsals for the National Film Award. Tomorrow – the red carpet ……. I`d better get a shower!!